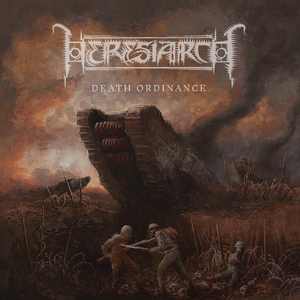 Black metal plus death metal equals war metal. There’s really not a better combination if you are looking for the ingredients to flat-out pummel your audience with an all-consuming musical Armageddon. As conventional as it may be, the full-length debut of Heresiarch carries that particular mission statement as its flag, and does a good job of leading the audience to victory on the battlefield.

When it comes to the originality quotient, one can clearly make the argument against Heresiarch but they do their damnedest to make you forget about that fact. After all, this isn’t music to sit down with and overanalyze with an afternoon of pleasant conversation. This is the type of music that wants to be screamed from the top of the listener’s lungs while headbanging as furiously as they can. The songs of Death Ordinance follow those orders directly. Short, ripping cuts like “Lupine Epoch” and “Storming Upon Knaves” offer an auditory gut-punch with their buzz-sawing guitars, blastbeats, and crazed vocals. Even a longer cut, such as “Desert of Ash,” does it’s best to keep things moving at a frantic pace (and the march ever-onward). But what keeps the album afloat, is their ability to go outside the usual ‘play as fast as possible, always’ mantra. Other songs like “The Yoke” and “Desert of Ash” give some moderation on the brutality front without compromising their endgame, constructing some filthy melodies/atmosphere that add to a haunting and caustic feeling even at a more tepid pace.

Death Ordinance sticks to most of the confines of war metal, but some sneaky go-arounds allow it to flourish a bit more than some of their peers. There’s plenty of wall-to-wall brutality for those that are into it, but the occasional use of some grittier melodies ensure that Heresiarch will generate some wider appeal.