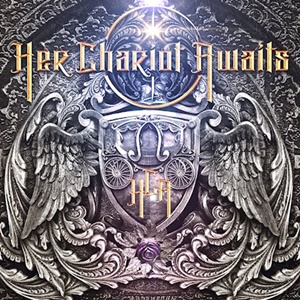 Even after a tragic tour accident for Adrenaline Mob almost three years ago that caused numerous band injuries and the death of bassist David Zablidowsky, guitarist Mike Orlando still keeps moving full steam ahead with his music career. Her Chariot Awaits is his foray into the melodic hard rock realm featuring a female vocalist – putting his songwriting together with ex-Sirenia singer Ailyn. Bassist Brian Gearty and drummer Jeff Thal (brother of Ron ‘Bumblefoot’ Thal) round out the lineup – and it’s not necessarily going to be much of a surprise with what you get in terms of style, but there is a primitive charge and surge of shred-like ecstasy from Mike that brings this material to higher levels than what you would normally expect.

In the pocket rhythm section work, comfortable power chords, and emphasis on Ailyn’s five-octave voice make these eleven tracks delightful for those who appreciate the work of Halestorm, In This Moment, and even the commercial leanings of No Doubt. Mike works with Ailyn to push the best melodies out of her – super catchy choruses within “Misery” and the Gary Glitter-like rhythmic-oriented “Say No” early standouts, the despair and impassioned intense nature of her delivery for the latter a testament to her chameleon-ish shaping of her voice to accent the fun spirit. Mike fires out those catchy power combinations and then turns on the arpeggio, fleet of finger charm for his lead breaks – “Take Me Higher” and “Line of Fire” key numbers for his solid chops and fancy licks. The ballad “Just Remember” has the emotional comfort and tender restraint to be ideal for commercial radio hit consumption, Ailyn delivering a stunning multi-part harmony segment for the chorus. And then there’s the stunning remake of “Constant Craving” – a 90’s staple from KD Lang given a much darker interpretation, effectively creepy and heavier that many will think its more Her Chariot Awaits and less about the original.

This is an outing that hopefully has legs to grow, as it may not be pure heavy metal, but it’s solid melodic hard rock that makes you feel good.