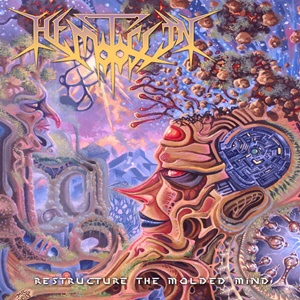 Hailing from the Bay Area, Hemotoxin have already made quite the impression through their first two full-lengths Between Forever…and the End from 2013 and its follow-up Biological Enslavement in 2016. The trio of musicians pull out all the stops in a whirlwind of thrash/death with progressive/technical tendencies, and yet manage to squeeze in the right modicum of hooks and melodies to keep things from totally going off the rails. Which leads us to the third album Restructure the Molded Mind – an eight-song outing that blisters the aural atmosphere in under thirty minutes, but will leave your body, brain, and everything else bruised, confounded, and probably yearning for successive playbacks much like classic Death, Obscura, Atheist, or even Vektor can accomplish.

How guitarist/vocalist Michael Chavez, bassist Shane Hunt-Dusse and drummer Brandon Wilcox manage to squeeze so much musical information into compact, three to four-minute arrangements is mesmerizing – check out the cyclone-like snare slams and riff parade for “Nihilistic Principle” for starters, or the subtle bends against the stairstep transitions and building tremolo activities against some low-tuned death grooves for “Unreality” and you’ll be swept away instantly to their metallic maneuvers. The musicians have the freedom to intertwine thrash tempos and blast beats, intricate death sweeps and arpeggio-fueled lead breaks – against the menacing, forceful scream-oriented melodies of Mr. Chavez, dominating in a clearer Chuck/Death-like presence. The hooks you hear are in different places – the circular rhythms against tribal-like drum parts for “Acrimony”, or the more traditional/melodic death-ish guitar harmonies throughout “Automation” as Brandon switches up his ways from thunderous double kick/blast-beat action to solid thrash/power mechanics. If there’s one minor criticism, sometimes the kick drums overpower the mix – something this scribe wouldn’t expect in a three-piece outfit, but there are times where you want to hear a bit more even kit sound all around, as songs like “Legions of Alienation” and the title track have that versatility to allow Shane’s fluid bass antics to jump and frolic in, out, and around to drive the music to that outer progressive dimension.

Hemotoxin deliver a crushing progressive thrash/death outing for Restructure the Molded Mind. Considering the deep affinity for Death, Atheist, and Gorguts – these gentlemen should have no trouble slotting in well with those acts, so if you are looking for a current take on that style, this is relevant and money in the bank for those tastes. 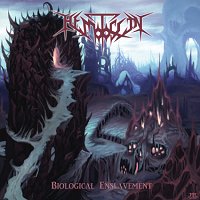