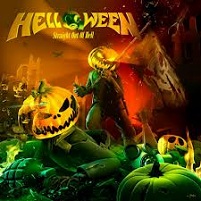 The course of time has been kind in the Andi Deris–led Helloween years. Even when the current incarnation of Germany’s long time power metal veterans make a misstep (Unarmed anyone?), it seems to be followed up by a killer studio offering (2010’s 7 Sinners) . And unlike the latter Kiske-years where the band couldn’t be arrested in North America with a record deal, the current market place appears to be very pumpkin-friendly these days with regular touring jaunts and a new generation of fans clamoring for fresh studio product.

The 9th Deris-fronted studio album and 14th in their long history, Straight out of Hell benefits from the four core songwriters who willingly offer diverse emotional dynamics from every arrangement. If you want the double bass loving, dual guitar harmonizing, happy vocal melody driven songs- “World of War” and “Far from the Stars” assuredly deliver eargasms. In need of a lighter ballad to swoon with your partner – how about “Hold Me In Your Arms”?

What’s interesting is Deris’ songwriting can range from the epic seven-minute opener “Nabataea” through the more melodic, commercial-driven “Waiting for the Thunder,” while guitarist Sascha Gerstner takes a positive spin on the humorous/sarcastic anthem “Asshole” and fellow guitarist Michael Weikath picks a more musically driven tact for another highlight “Years.” Most of the time an album that contains 60 minutes-plus of music can flatline due to sameness – not the case with Helloween because the quintet know more than one speed, one tempo, one style of riff and approach the material with individuality at the heart of it all.

1998’s Better Than Raw to me, was the best Helloween album to date since theKeepers saga, but now Straight Out Of Hell has pushed that off its pedestal. I look forward to another world tour with Gamma Ray this year, as Helloween still can teach the old (and new) power metal guard a lot about professionalism in their performances.