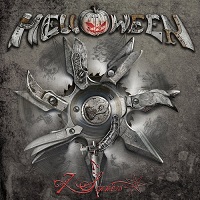 This may only matter to anal-retentive scribes like yours truly, but 7 Sinners is a heavily-penned Andi Deris Helloween album, which for those who live and die by the Keeper albums, is a different ballgame altogether. Not that we’d knock Deris’s songwriting aptitude, but only two songs here are written by main ‘Weenie Michael Weikath, the man who is partly responsible for the creation of European power metal and some of the band’s best songs. Thank goodness Deris could write, or another Chameleon could be upon us, yet the Pumpkins know better than that…

Unlike Gamma Ray, Helloween has gotten increasingly heavier, something that’s clear-as-day on opener “Where the Sinners Go,” lead single “Are You Metal?” and “Long Live the King.” A lot of this falls on the capable shoulders of drummer Dani Loble, who provides far and away, some of the fastest tempos to date on the aforementioned “Are You Metal?” and “Who Is Mr. Madman?”

The cheeky, free-for-all lens the band has a made a career out of comes through during the fun “Raise the Noise” (love the flute solo), and “If A Mountain Can Talk” (the Weikath/Sascha Gerstner guitar trade-offs are brilliant). But again, these songs are put through the extremity ringer, with Loble giving just each of the 13 songs an added bump that even going back to first drummer Ingo Switchenberg, was never this apparent.

Per the usual, Helloween manages stumble on a few tracks, most notably the too-clean “The Smile of the Sun” and “My Sacrifice,” which oddly sounds like a Masterplan knock-off. With the aid of down-tuned guitars, Deris’s voice is in top form, adding lots of color and character to album closer “Far In the Future,” a number that clocks in nearly at the 8-minute mark, evoking visions of “Keeper of the Seven Keys” (the song), but not quite as monumental.

In a career that has been as topsy-turvey as they come, Helloween circa 2010 have quite a bit of pep left in them. In fact, it’s not a reach to say that they’re a heck of a lot more of an imposing power metal band now then they were 10 years ago. 7 Sinners may not have blissful glee of the band’s glory years, but it’s the type of album you wouldn’t expect a band who has been througheverything at this point in their career. Here’s to more “happy” songs next time out – you’ve proved you can be heavy, Helloween.