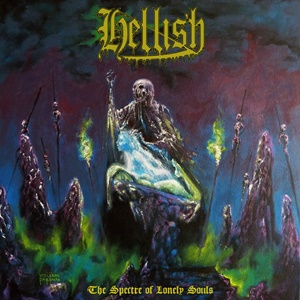 South America remains a fervent continent of metal activity – international bands love touring there to such a passionate fanbase, and the domestic quality of bands country to country continues to improve annually. Hellish from Chile represent another blackened thrash act to the mix. Together since 2010 they’ve released four demos, an EP, a live album, and a studio full-length which brings us to their second album The Spectre of Lonely Souls. Given this scribe’s initial foray into the quartet’s style, this is a compact and raw excursion into the lands of primal speed and unyielding attitude – one that most won’t forget anytime quickly.

Blitzkrieg drumming, lightning quick transitions, and maniacal blackened screams over the top of tremolo-led picking and speed/thrash riffs are the signature aspects for Hellish when peering into cuts like “Screams Come from Inside” and “The Walker of Shadows”. When the band decide to take the tempo down to relatively normal levels for the opening segment of “Sacrifice”, the musical marching strains take on these epic nuances, as if Manowar or Manilla Road entered the arena before ramping things up to Sodom meets Venom-like fury. Bassist Necromancer races along to the music with his raspy screams – bone chilling with the right amount of delay and reverb to heighten the ancient belief and Satan-oriented themes for “The Night” and “Bloody Tales”. Those in the underground that grow weary of triggers and digitized sounds will welcome the in your face production values – and at nine tracks and a little over 31 minutes, it’s intense enough yet not overwhelming to consume.

Hellish will never be mistaken for the most original band in the blackened thrash world – they just know how to take the right combinations of attitude, ferocity, and power to make for some serious carnage in the crowds of the underground.