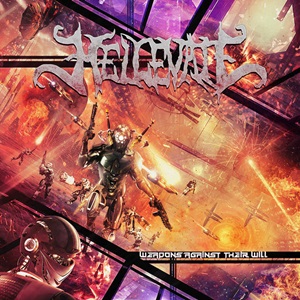 Capturing attention from the get-go on name alone (smashing together two words as one), Hellevate hail from Kansas City, MO and have been honing their wares since 2007. Releasing two EP’s and a full-length since 2008, Weapons Against Their Will as their second album puts the pedal to the collective metal, as the quintet serve up a dozen delectable tracks that traverse speedy thrash/power/heavy lines. Sometimes being away from the East Coast/ West Coast music hotbeds gives an act like this their own identity – free from following any trends that may crop up in the live circuit.

Excelling at adding a modern approach as the songs shift often stylistically within measures will pay dividends in Hellevate’s ability to appeal to a large metal community – check out power juggernaut “Blasphemer Deceiver” that chugs along as if Skeletonwitch and At The Gates were being careened into some Maiden/Primal Fear riff transitions. Drummer RJ Whitmer lives up to his ‘Machine Gun’ nickname, relentless double bass against some sick tempo changes and fills makes “Hall Pass to Hell” and the mid-tempo slamming “Nocturnal Grip” two highlights worth keying in on from this aural aspect. The guitar work has serious hero-worship potential – the leads of John Cole and Dan Whitmer occasionally hitting melodic death terrain, mindful of adhering to the key sequences of each track. Bassist Zack Burke takes the lead on “The Iconoclasm”, an 8:40 epic where cultural axe play weaves in and out in that classic Manowar loincloth terrain, and singer Andrew Lufkin can float in lower to mid-range territories for the verses, the instrumental sections often having this Black Sabbath swing march moodiness.

Worry set in when looking at the almost hour-long timeframe for Weapons Against Their Will – but Hellevate understand the need to mix things up in terms of arrangements, tempos, and riff/verse construction, so the listener never feels bored. The background gang vocals and relentless attack through most of the material gets the adrenaline pumping and probably will cause a lot of brain splatter (or limb removal), just the way the quintet probably intend for these songs to strike. This is impressive, first rate songwriting – incorporating a modern fusion of thrash, power, and traditional/classic metal that whips up a frenzy of interest and should be a part of your world if any of these styles receive airplay in your world. 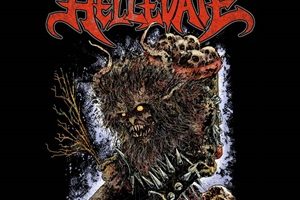