Head of the Demon – Sathanas Trismegistos (The Ajna Offensive/Invictus Productions) 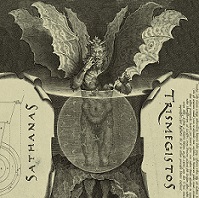 Occult metal has yet to outlive its usefulness. While the subset never had its moment in the sun (or should we say “dark?”), probably because The Devil’s Blood never reached their full potential, the bands still honing in on Old Scratch in song and verse maintain a sense of dignity and class, much like Sweden’s Head of the Demon. This Stockholm-based quartet has been functional since 2012, with their self-titled foray of the same year being the only other album to the credit. Sathanas Trismegistos, though, completely rewrites the script from its more black metal-inclined predecessor.

The stripped-down, devoid-of-distortion guitar tone found here should be of familiarity, for it’s practically the same one classic era Danzig employed. It’s singular, almost pinch-y, if you will, prone to augmenting eerie and minor chord work. As such, there’s a perfunctory degree of vintage metal to it all; almost like how Mercyful Fate would sound in their heyday had they one guitarist and slowed their songs down. Never the matter, as the ominous stabs of “Armilus Rides… Again!” along with the invocation angle of “L.L.L.” manages to create a less is more while doing more feel, something that is usually out of reach for most bands of this ilk.