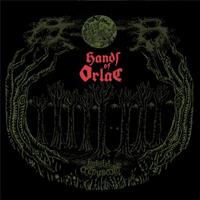 A Sweden-by-way-of-Italy female-fronted, horror/occult act, Hands of Orlac might be a year or two late to the party. That “party,” of course, is the witchy woman fronting a 70s-flavored rock band shindig, a practice perfected by The Devil’s Blood and in part, Jess and the Ancient Ones. Perhaps the most noticeable difference between Hands of Orlac and the above-mentioned pair is that Hands of Orlac pattern their lyrical approach after Italian horror cinema, and not the works of the devil, which obviously, The Devil’s Blood and to a less blatant extent, Jess and the Ancient Ones partake in. Either way, the band’s sophomore Figli Del Crepuscolo effort figures to get lost in the shuffle, even if it has some worthy characteristics.

Lead vocalist The Sorceress (the rest of the band goes by “The Templar,” “The Puritan,” “The Clairvoyant,” and…Alex Moratis, who apparently didn’t find suit in giving himself a similar moniker), has as expected, the mysterious, somewhat harmonious howl needed to convey such throwback material. She’s got plenty of eerie moments in check, like on “Last Fatal Drop” and the stirring “A Coin in the Heart,” which emerges as the album’s most adventurous cut, in no small part due to some flute action from The Sorceress herself. But, there’s a natural tie-in of blandness in a few of these cuts where the band re-enacts some rehashed 70s rock material, which for those not 100% down with the style, may be turned off by. (The obvious suspects are the opening title track, “Burning” and “A Ghost Story.”)

As unremarkable as Figli Del Crepuscolo is, it might be prescient for Hands of Orlac to develop some type of gimmick to give themselves a name. Who knows what such a pursuit would be, but point being, this is one of those log-jamming albums, sure to clog the pipes of horror/occult metal with a female out front. Surely more bands like this to follow…

Hands of Orlac on Myspace