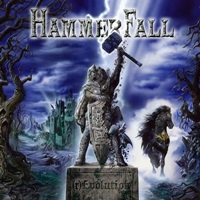 Hoist your shields high, warriors of faith, Hammerfall returns after a year-long sabbatical for their ninth studio album on the interestingly titled (r)Evolution. After all, the Swedes did kick start a new ‘classic metal’ revolution at a period of the late 90’s when people got tired of guitar rack effects, down tuned bass and no hint of singers staying in pitch. Needing a chance to unwind from the consistent album/tour/album/tour cycle they’ve engaged in since their Glory to the Brave debut explosion in 1997, the quintet has managed to sustain healthy headline status with their brand of happy melodies, throwback lyrical concepts (dragons, swords, and steel themes abound) and series of anthems/ballads that appeal to classic power metal fans.

The quintet aren’t out to re-write their formula this deep into their career. Drummer Anders Johansson lays down a solid rhythmic showcase, never overshadowing the Dronjak/ Norgren axe electricity or harmonic nuances, professional in all regards for first single “Bushido” and Judas Priest powerful on “We Won’t Back Down”. Joacim Cans has another tender chance to develop his low range and falsetto note abilities for the seasonal ballad “Winter Is Coming,” aware of the fact that he’ll never eclipse Michael Kiske or Daniel Heiman for immortal power supremacy.

There is a little bit of cultural/Irish guitar kick in the main hook on “Origins”, and my current favorite “Live Life Loud” is classic Hammerfall: opening in dramatic, semi-bombastic fashion before the drum/guitar parade aligns in a mid-tempo evolution that lyrically champions metal fans all across the globe (‘feel the power in your veins/ raise your fists and yell!’). And the title cut has that “Let the Hammer Fall” sing in unison element that should make it go over like gangbusters when the band navigate stages on tour.

Those who take the power metal genre too seriously definitely feel Hammerfall is campy, cheesy, cliché, and any other host of negative adjectives you wish to hurl out there. Ultimately the fans speak loudest in terms of support through ticket purchases and merchandise sales, and I would say (r)Evolution recalls more their glorious late 90’s studio peak than spottier records like Renegade or their last studio record Infected. Hot on the heels of an impressive Wacken festival performance this year, I’d say they’ve certainly got enough anthems to bleed the dragons dry for decades to come.