Hammerfall – Rebels With A Cause DVD (Nuclear Blast Records) 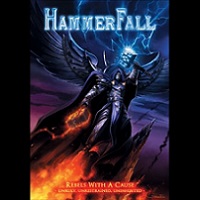 Hearing a lot from the Hammerfall camp these days, which is both a good and bad thing. Good, in the sense Rebels With A Cause is a pretty fun watch; bad because the band must, must be taken in small doses and the twin attack of this DVD

and their recently released Masterpieces covers album doesn’t exactly keep the band out of the public eye.

Featuring footage, videos and a full band interview, Rebels With A Causecharters Hammerfall from 2002 to 2007 in support of the Crimson Thunderalbum and beyond. At this stage in their career, the buzz has already worn off, as the band was in full damage-control mode with the aforementioned Crimson Thunder platter after the bust that was Renegade. A candid interview with all five members present (which tends to drag at times) chronicles this, along with some tour and studio debauchery.

Moments of note include the never-ending backstage antics of drummer Anders Johannson, who has a habit of streaking and destroying property, much to the chagrin of the band’s tour manager. Slightly more comical is the video shoot along with the Swedish National Curling for “Hearts On Fire” which presumably did nothing for the band’s street cred. Singer

Joachim Cains’ barroom brawl back in 2002 is also documented, where the singer received a right hook to the face just for being in Hammerfall.

, some TV clips (which are also funny) and some random behind-the-scenes action as well.

to watch, Rebels With A Cause is one of the finer DVD’s to emerge of late and is both comprehensive and easily digestible. Hammerfall are total pros and you could do a lot worse than this DVD, Swedish Curling team and all.