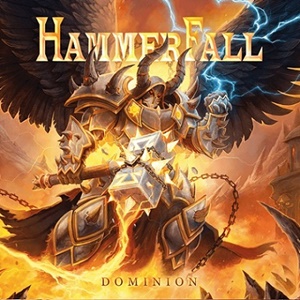 Decades ago, records like Glory to the Brave and Legacy of Kings established the resurrection of interest in classic, traditional/melodic metal – spearheaded by Hammerfall. Ascending to headlining status in Europe, the Far East, and Latin America, their impact in North America has not been as swift – although they gained serious respect over the course of touring with Delain and Flotsam & Jetsam to support their last album Built to Last from 2016. The eleventh studio album Dominion differs in terms of developing the songwriting on the road versus settling home to craft the material – and probably explains why these songs penetrate in a vitality rarely heard for such an experienced, seasoned outfit.

Hammerfall may succumb to most of the standard hallmarks in their 80’s influences, multi-part gang-oriented choruses that boom from the rafters, and synchronized guitar/drum movements that develop anthems of Priest/Accept grandeur – but that’s what is also so endearing in today’s scene. You know you’ll get a mixture of mid-tempo offerings for “Dominion” and “(We Make) Sweden Rock”, faster power/double kick outings through “Scars of a Generation” and the Painkiller-esque “Testify” plus the occasional ballad to diversify the atmosphere – place the piano-oriented “Second to One” here. Sitting with the material a little longer than normal, you can tell attention to detail allows for the right hooks, transitions, and lead breaks to carry that much more magnitude for listener interest and longevity. Oscar Dronjak and Pontus Norgren embody the pinnacle twin axe team in this style – laying down serious headbanging rhythms and peeling off memorable solos throughout, as “Dead by Dawn” and “Never Forgive, Never Forget” prime examples of their stellar abilities to play for the needs of the song first. Now that David Wallin has settled into his drum throne, it’s evident he’s flexing a little bit more of his mechanics and flowing fill spirit as “Bloodline” gets the blood (and fists) pumping.

The cover also features Hector their mascot in a more futuristic scenario- alerting the fans that Hammerfall aren’t content to rest on their past but remain relevant this deep into their career. Dominion proves the band’s importance in keeping classic/traditional metal top of mind, sure to elicit the proper feel good appreciation from the legions and maybe bring even more new followers to the fold.