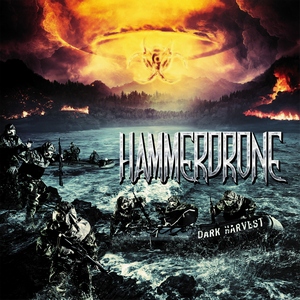 Whatever happened to good, old meat & potatoes melodic death metal? No excesses, no modern trimmings – just solid melodies and well, actual death metal. As the shift towards integration with keyboards and clean vocals came about (nothing wrong with any of that either of course), many may have jumped the old school ship in favor of a sound that was more en vogue. Leave it to the Canadian act Hammerdrone to remind us what we’ve been lacking in our melodeath diet.

Eschewing all the fancy, modern stuff allows Hammerdrone to get right into the good stuff. And no, we aren’t going to see yet another old school Gothenburg type album either – Hammerdrone play death metal that happens to be melodic. Aptly sinister melodies ring through each of the tracks (sans the intro and later instrumental “Harvest the Void”) mostly focusing on the mid-tempo, with some notable ramp-ups in speed. Driving rhythms and powerful growls fill out the remainder of the music, and what’s most impressive is that the band continues to push some tracks into the 6-7 minute range with nary a concern. It’s a solid reflection of the band’s songwriting, and proper melodic implementation that the longer tracks, such as “Black Bison,” hold up just as well as the more succinct cuts like “Ancestral Weight.” In fact, it’s the focus on darkened melodies above all that make the songs gel together.

Melodic death metal, death metal with melody…whatever way you’d like to phrase it, there’s plenty of enjoyable riffs to be found in Dark Harvest. There’s no substitute for good songwriting, and Hammerdrone have that concept well in mind. If you are looking for a new death metal band to seek out, Hammerdrone is a great starting point.