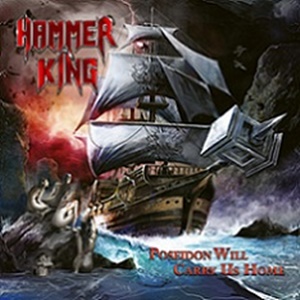 Continuing in the true metal tradition of their first two albums, German act Hammer King doesn’t feel the need to really change the formula much for Poseidon Will Carry Us Home. It’s all about the sturdy anthem feel, where you hang the guitar harmonies, solid rhythm mechanics, and singalong chorus melodies to the heavens. Even if you introduce new aspects lyrically such as a nautical trilogy spread out among the twelve main tracks, it’s easy to trace the musical influence tree for the bulk of these arrangements, steady as ever to not rock the boat to their core fan base.

Repetition appears in multiple ways throughout these songs – in the form of specific gallops, favored words (“King” appearing countless times), or discussion regarding knights, glory, plagues, and victory during battles and wars. The quartet promote the call to arms aesthetic with twin guitar harmony refrains, culturally-tied in bass lines, and high-pitch oriented vocal melodies that reminds listeners of Manowar and Hammerfall, plus a few natural Teutonic nuances in terms of phrasing and execution. The title track opens the record as part one of the ‘nautical’ trilogy – a Manowar style mid-tempo effort that sets the tone for the epic/true nature with the upper Joacim Cans/Hammerfall-like range of guitarist Titan Fox V conveys the lyrics as if you are on the journey with the band. A backwards messaging narrative opens “Warriors of Angelhill”, where lines regarding ‘a brotherhood of might’ that ‘unify tonight’ promote the unite as one aspect to the best bands of this genre. Drum march strains signal “Glorious Night of Glory” – where you can almost imagine troops lining together in unison preparing for a victorious battle sequence while this track airs in the background. Towards the album’s conclusion, “At the Mercy of the Waves” and the 7:07 “We Sail Cape Horn” pack that magnificent two-three punch for the previously mentioned trilogy to captivate listeners, the latter bringing in some clean Maiden-like charm in spots to prove Hammer King possess dynamics beyond the steady power/traditional riffs that are mandatory.

Poseidon Will Carry Us Home is acceptable true metal – but nothing really new to the genre that you won’t get delivered better from their influences. Probably best served for the diehards to this movement, as the casual listener may scoff at the themes and predictable hooks/melodies present. 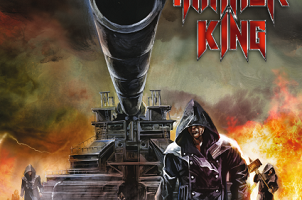