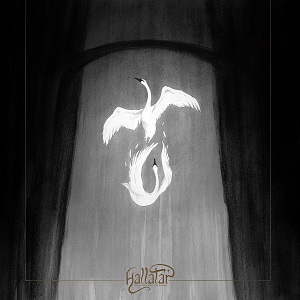 The untimely 2016 passing of Juha Raivio’s significant other Aleah Starbridge has, obviously, had a lasting effect on the Swallow the Sun leader. The duo’s most-excellent Trees of Eternity project saw proper release last year, serving as Starbridge’s final recording. Hallatar appears to be an extension of Trees of Eternity, only this time, the incomparable Tomi Joutsen of Amorphis is lending his pipes along with former H.I.M. drummer Gas Lipstick. Armed with more of Starbridge’s poems and her memory, Raivio, Joutsen and Lipstick have created a gut-wrenching effort in the form of No Stars Upon the Bridge.

Following in the familiar tread and terrain of Swallow the Sun’s depressive doom marches, Hallatar is augmented by Joutsen’s multi-faceted vocals. He’s doing less actual singing and more grunting here, which is fine, as the man can unfurl a funeral doom moan with the best of ‘em. In fact, Joutsen’s work on the opening “Mirrors” is perhaps his most animated to date, with the Finn employing a variety of tones and modes, including his silky-smooth clean vocals. Melodic flourishes eventually creep in on “My Mistake,” which features Draconian’s Heike Langhans, while the poignant, if not stirring “Severed Eyes” is another carefully-contemplated, wistful number that Raivio specializes in.

While it’s fitting (and sad) Starbridge’s is the last voice heard on the album’s closing cut “Dreams Burn Down,” her imprint is all over No Stars Upon the Bridge. Raivio, who has sat out Swallow the Sun’s recent North American touring jaunts, has remarkably dug himself out from the absolute depths to create an album on par with his primary band’s best work.