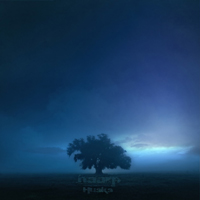 Haarp is a band with a very unusual name. It stands for High-frequency Active Auroral Research Program, and they use all lower case letters for the logo. I’m not sure what the significance of the use of lower case letters are for, although it might be a carry over from the grindcore outfit rat in a bucket. Both vocalist Shaun Emmons and drummer Keith Sierra were a part of that band, so this may account for what you get here. Shawn Emmons though has debated the origins behind the name, going on record and saying it is a reference to Celtic mythology. He then states that the Dagda played a haarp endowed with special powers to either enchant or even kill people. He adds slyly; it was his weapon of choice.

In any case, Haarp’s music can be described as sludge/doom metal with a smidgen of death metal vocals to round out the sound. It’s definitely a raucous affair for this sort of thing, but the low and thick groovy-heavy dirges can really grate on your nerves for those unaccustomed to the style. In fact, all three songs feel like one long composition at times, despite the unrelenting variance of tones found throughout the disc. On the first track “Deadman/Rabbit” extends to nearly 18 minutes of pure hostility, and it features vocalist Shaun Emmons raspy growls. The song is the longest of the three tracks and its prime mutation of slow rhythms combined with the fast riffs achieves the overall level of disdain.

The middle section of this release brings us to the shortest composition called “Bear” and it works best for a few reasons. Mainly because it clocks in about a little over 8 minutes and it is probably the most sludge you will find here. The song is vicious, unrelenting and adheres to the classic feel of what sludge of metal should sound like. The remaining song “Fox” takes a different approach for the duration of 12 minutes and there’s definitely a doomy feel to the composition. At times it can be oppressive, but the slow dirges found permeating this husk of a song is a real treat for sludge/doom fans. In particular the ending, when the death-churned guitars fade out and we are left with a pounding drum beat to end things.

Ultimately, this may not be everyone’s cup of tea. I say this with the knowledge of having the ordeal of sitting through 40 minutes worth of music. I liked specific parts of the release, but had trouble sustaining long term interest. On a side note though, the CD was produced by Phil Anselmo and this is coming from a man who’s made a career of fashioning viciousness from his art, so perhaps he’s had a major influence on this release. Regardless, Haarp’s music is not for everyone, but for those with violent mood swings and anger management issues, this might be the kind of music for you.