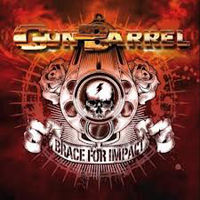 Germany is definitely known for producing some quality music in all genres. The most prolific form in my estimation is within the area of power metal/heavy metal, where hundreds of solid acts prosper every single day. One such act in particular though is Gun Barrel, have resurfaced after a four-year hiatus with Brace for Impact.

Much has happened to this band in the interim though, their previous singer Xaver Drexler tragically passed away in 2010 leaving a huge gap in the lead vocal department. The band remedied that situation in 2011 with the addition of Patrick Suhl from prog rockers Pantaleon. His raspy impersonation of Axel Rose is lukewarm at best, and I found his style lacking in personality or being able to reach any real range with his voice. Some might even find it mundane on a whole, but all I wanted was a little more depth that Drexler had.

Despite the issue with the vocals, I found the music on this release laden with attitude and packed with riff driven sleaze rock. Bands like Guns N’ Roses, AC DC and Saxon come to mind, and you can hear these influences in songs like “Dancing On Torpedos,” “Diamond Bullets,” and “The Wild Hunt.” Everything blends seamless for my tastes; I just wished the songs exhibited a little more flair and potency. In many ways, this release is simplistic enough, but you might only be able to stomach a handful of tracks before tuning out.

Overall though, I am marginally recommending this release largely based on the bands that influenced the recordings for this album. I dig Saxon and the Gunners, so it’s great to hear that ethos commonly threaded through the musical landscape that is Gun Barrel.