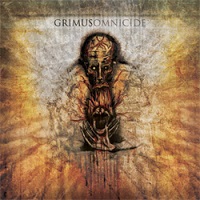 Lots of grime-related names: Grime (who we just reviewed), Frank Grimes from The Simpsons (who was electrocuted during a rant over Homer’s ineptitude), and Miami Dolphins cornerback Brett Grimes, who DR is hoping will commit several penalties during his Week 1 matchup against the Cleveland Browns. New Jersey’s Grimus is the band in question for this review, boasting a strong lineup with members from unheralded American black metallers Windfaerer, and tech-death maestros Allegeaeon in its ranks. ‘Tis a shame, though, that their Omnicide debut doesn’t quite live up to the pedigree of its parts.

Playing a very in-the-now brand of death metal, the five-piece come to fancy a lot of today’s death metal techniques, including overbearing vocals, disharmonic riffs, and a squeaky clean production. Obviously, the two notes about the vocals and riffs have always been a part of death metal, but you can clearly tell when something was written in 2013, versus something with 1993 in mind. Therefore, the nine songs that make up Omnicide are appropriately brutal and technical, but lacking identity, even though the splintered and evil-sounding speed-picking on “I.V.A.N.” are choice, as well the precise chug-a-lugs on “Cradled by Misfortune.”

The reality of the situation is that you’re not going to get anything from Grimus that the likes of Thy Art is Murder, Whitechapel, Fit For An Autopsy, or any number of circa ’10’s death metal bands aren’t offering. A case of unrealized potential.