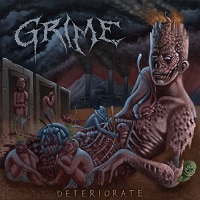 Rather easy to figure out where these Italian lads are headed…and it’s not pristine and lean fluffy metal. Grime is an Italian trio who formed in 2010, and after a successful self-titled 2011 demo, have ramped-up their efforts by way of their first full-length, Deteriorate. Now, everything about the band suggests they’re American, from their tones, the garish vocals, and even the visuals, so don’t expect to find some sort of unique Italian spin on this. Obviously, it’s nasty, ugly stuff, but not so different from the norm.

With riffs soaked in sludge and the blues, the eight cuts on Deteriorate are mostly of the repetitious, partly harrowing variety. Totally leaving out Marco’s one-dimensional and drab vocals, the onus falls on riffs that are cycled through a lot, and then some more, then again. Perhaps the goal was to engage in some sort of hypnotic trance, so that’s when “Burning Down the Cross,” “Down By the River of Dreg” and “Pills” have their fun. And even if the ideas are utterly simplistic, the point is made…and taken: Grime know how to operate well within the ghastly and oppressive confines of modern-day sludge.

Since the album is mostly straightforward, there’s not as much patience-testing as one would initially suggest. Sure, Grime could use some more ideas in their bag ‘o tricks (and should ponder just being an instrumental band), yet Deteriorate fits the bill of dirty-sounding, melody-bereft metal. How else should a band called Grime sound?