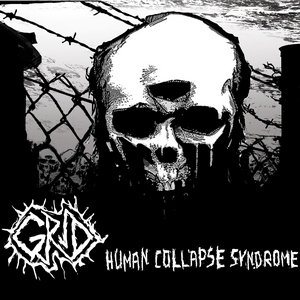 It’s often noted that grindcore seems to work best in short intervals – no one is asking for an hour-long grindcore assault (well, maybe someone out there…but not the majority of us). Alas, Grid does stick to this notion with their new EP, Human Collapse Syndrome. 8 songs, 10-minutes…in and out within a moment’s notice. All while blasting a hole through the nearest wall.

Built on the familiar traditions of bands like Nasum and Rotten Sound, Grid also sees fit to include some of that d-beat fury to see if they can really max out the energy in each song. And it works – each track is a scathing assault on the ears, with Grid trying their hardest to flatten the listener with fast-paced and blasting intensity. A few spoken word samples are included, some even during these bursts of energy, but notably on the longest track (at a staggering 2:23 runtime), after the band eases into a slow and crushing groove and into more atmospheric waters. But don’t worry, this isn’t a record about ambience or subtlety – this is all about buzzsawing guitars and sheer chaos. A take no prisoners type of record.

Much like the album itself, a reflection of Human Collapse Syndrome is best as a short snippet. A grindcore fix as strong as any other you might find, despite the familiar setting. But it sure does pack a wallop in all the right places, fulfilling its intention. Best played at maximum volume.