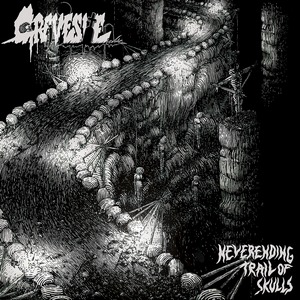 One thing that’s certain – Neverending Trail of Skulls is a pretty killer album title. Surprised no one (at least to this scribe’s knowledge) has scooped that up as a band name to be honest. Brutal, and altogether fitting for this Italian death metal crew’s sophomore effort. And despite the retro artwork that adorns it, Gravesite is not your average throwback listen.

That’s not to say that Gravesite don’t throw things back to the glory days of death metal, because they do bring with them a vintage feel even if it’s not exactly easy to link back to one location. There’s some American (Floridian) influences, some Swedish ones, and some just pure death metal feelings that coat the album. It’s retro, but it doesn’t just stop there. Outside of the intense and brutal riffing and enjoyable grooves, there’s also some more intricate guitarwork that’s going on within alongside some thrash components and even a little bit of doom (“Atrophied Organs”). The doominess is the least visible piece, as the band spends most of the album switching between some hard hitting grooves and mid-tempo swagger and energetic speed runs (see “Sewer Freaks”), but is a welcome change of pace. On top of everything else are the vocals, which come in as just as intense as the music. Growls, screams, it runs the gamut and helps bring the music up to another level of crazed. If there’s one downside, it’s that despite the emphasis on varied riffs and some occasional technical stuff (not tech death by any means), it doesn’t seem to stick in the brain as well as it should.

Alas, minor shortcoming aside, Neverending Trail of Skulls should find a decent enough home with fans of more old school flavored material. The fact that the band doesn’t prescribe to one formula only is enough to make it worth a listen, if only to see if the style fits with you.