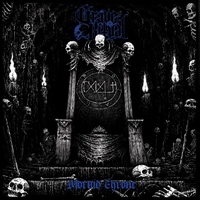 All hail the eternal, lumbering march towards Golgotha! Particularly as of late, with an enormous push of bands pushing out that combination of Incantation, Autopsy, and Bolt Thrower in order to drone their militant attack. Grave Ritual falls comfortably into that description, and their second release, Morbid Throne, isn’t going to burden you with any surprises. Other than perhaps that Alabama isn’t going to be your first thought for location when you hear an album like this.

Morbid Throne is about as straight-forward as this death worship can be. Not that it’s a bad thing in this regard, but it’s quite apparent. This is no-frills old school death metal worship the way that the masters had intended. The aforementioned Incantation/Autopsy/Bolt Thrower mash-up doesn’t really reek of originality, but they do know exactly what needs to be done in terms of pacing. Grave Ritual neatly just the right amount of funeral marching doom riffs with a more speedy and devastating death metal side. And the guitar tone suitably fits the approach, with sludgy, drop the bottom end heavy tone matching the subterranean growls that permeate the disc. All this, with surprisingly no “mud” in the production. It’s filthy, but not too filthy if you can get your head around that.

There’s no shortage of old school death metal on the market currently (just think about the first three that come to mind: in this case Cruciamentum, Dead Congregation, Grave Miasma). Morbid Throne is a good album, but nothing that screams mandatory listen. Which means it can be relegated to the “die-hards” only bin.