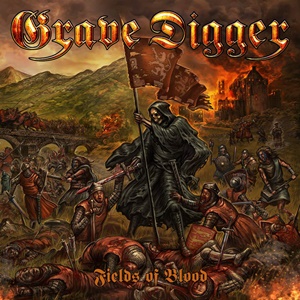 Completing the epic Highlands/ Scottish history trilogy of albums that includes 1996’s Tunes of War and 2010’s The Clans Will Rise Again, Grave Digger arrive at Fields of Blood, the 20th studio record for the group. Their profile higher than ever in North America thanks to a couple of tours with Blind Guardian over the past few years, the steady anthems and Teutonic-oriented heavy/power metal dished out hasn’t really changed much over what you’ve come to expect. Using extra bagpipes, choirs, and keyboards to flesh out the natural electric instrumentation, you’ll get eleven tracks (plus “The Clansmen’s Journey” 87 second intro) that take us through more tales of Scottish wars, battles, and legendary losses/victories of the past.

Former keyboard technician for the band Marcus Kniep became the drummer in 2018 replacing long-time member Stefan Arnold – and his energetic, propulsive style elevates the speed and precision in many tracks, especially evident for the double kick-loaded “Freedom” and steady mid-tempo romper “Union of the Crown”. While most of the songs are of radio-friendly lengths, the ten-minute plus title track throws out all the bells and whistles you’d expect from a longer arrangement: layers of cultural bagpipe strains, water effects, circular/building guitar work from Axel Ritt, a larger than life choir-filled chorus, and a folk-like transitional twist midway through that will keep listeners on their toes. The ballad “Thousand Tears” features guest support from Battle Beast singer Noora Louhimo, a great duet for vocalist Chris Boltendahl as he chooses to use more of his natural lower register during the verses – allowing Noora to handle more of the mid-range and higher emotional melodies. It’s hard to deny that Grave Digger understand how to write solid heavy/power metal songs that galvanize their audience – most will not have trouble screaming, shouting, and galloping along to a track like “My Final Fight”, even if it’s a little cheesy during the awfully repetitive chorus.

To still be doing this for 40 years, Grave Digger prove the dedication and passion to heavy metal will never die. Fields of Blood is another steady outing, inspirational for the end of a trilogy, and powerful in its own right.