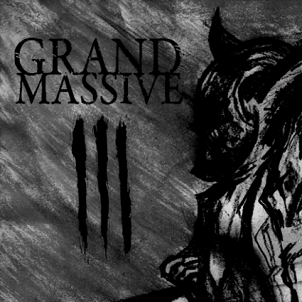 Fret not German bands who want to sound American: It’s not your fault your home country has the most unflinching rules in all of metal. As it has been pointed out to this scribe and uttered elsewhere hundreds of times, if a German metal band comes along and has success, they are to stay firmly in place. If they are new and don’t sound the part of a German band, then it’s a far more perilous climb, something Bavarian outfit Grand Massive may learn the hard way based on their third album, III.

By and large an American stoner rock outfit dressed up as a heavier German unit, Grand Massive parlay the same big hooks, big riffs, and big tones so preferred by the likes of Deliverance era Corrosion of Conformity, metal-years Clutch, and early Monster Magnet. Vocalist Tony Hermansen is the most convincing aspect of Grand Massive, able to worm his way through otherwise simple and partially listless cuts like “Horseman” and “Massive of the Sun.” It’s of little debate “Power of Gods” has plenty of persuasion in the power riff department; same bodes for “The Hunter,” but Grand Massive often come up short when it comes to those FM radio-snipping hooks and pure rock bravado.

Aside from III’s somewhat pointless cover art (can someone decipher what exactly that is?), Grand Massive may find themselves in an early hole based on the album’s overall general (not generic) rock tone. An odd duck in a highly competitive scene, Grand Massive isn’t pure retro rock or leather-toting power metal. Quite the unenviable position. Best of luck to the lads.