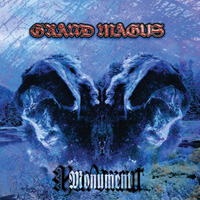 Totally hate the fact these guys are lumped in with the stoner scene – they’re so superior to that, it’s not even funny. Frankly, in terms of straight-up traditional metal bands, there may be no more appealing band, and that includes the likes of Enforcer and Pharaoh. Now that their profile has increased via the utter awesomeness that is Iron Will and this year’s Hammer of the North, the re-release of their back catalog via Metal Blade starting with their self-titled debut from 2001 and the album in question, 2003’s Monument, makes perfect sense.

Guided by the burly vocals of guitarist Janne “JB” Christoffersson, Grand Magus’s stripped-down, riff-based approach was just starting to develop on Monument. Christoffersson routinely sings his ass off, but never goes beyond his limitations, often leaving plenty of space for his Sabbath-like (what else?) riffs to do the talking. And like the ensuing releases, there’s a healthy dose of melody and catchy-as-fuck choruses.

The album picks up instant steam via the rollicking “Ulvaskall (Vargr)” and king-sized “Summer Solstice,” which boasts one of those bluesy, Jack-swigging choruses that only a fool wouldn’t get down with. “Brotherhood of Sleep” treks deep into Sabbath territory (think Vol. 4), with Christoffersson’s titanic riffs laying down a rather seismic foundation. Things do go astray with “Baptised In Fire,” which is a strong flirtation with the stoner doom sound the band has since moved away from, while “He Who Seeks…Shall Find” follows a similar route, resulting in two of the lesser-memorable songs here.

Still a cult quantity here in North America, Grand Magus are everything a traditional metal band should be, minus the oftentimes lame and contrived “We are metal!” stance that turns so many off. There’s little pretense with this power trio; they’re as heavy as a ton of bricks, have immense songwriting skills, and as evidenced by Hammer of the North, are only getting better. ConsiderMonument the jump-off.