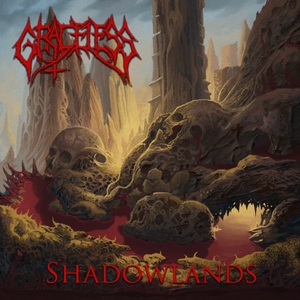 Old school death metal with a side of doom? It’s a combo that’s far more refreshing than a mere old school death romp, that’s for sure. Dutch act Graceless attempt to make a name for themselves with their first offering, Shadowlands, and end up leaving a pretty positive impression.

If the formula works, there’s not much need to tinker much with it. While that may be the mantra of Shadowlands, it never holds it back from being a pleasurable trip into pure deathly waters that lean into melodies without resorting to melodeath territory. Instead, one is treated to visions from the past, infusing a buzzsawing aggression with dark and intriguing melodies of a more gloomy nature. While the first few tracks, such as the title track and “Legions of the Fall” embrace plenty of more uptempo moments, the band seems to shine brightest when really pushing the doomier sounds. “Sumerian Flames” is the first real look at this part of the band’s sound, as it slowly builds things up without truly becoming explosive but providing some gorgeous guitar leads and melodies that pull you towards the abyss. The one-two closing knockout of “Iron Tears” and “When the Last Light Fades” provide a good opposition to each other, packing in more mid-tempo bruising before departing with a quality doomy march, full of melancholic leadwork.

It’s a familiar formula, but Graceless make Shadowlands more compelling with the level of attention given to their melodies. It can be aggressive in all of the old school ways when needed, but their songwriting sensibilities bode well for a bright, yet doom-y future. It should impress fans who are down for some old school worshipping.