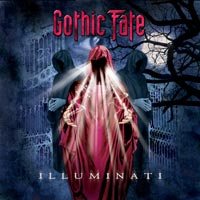 In spite of being German, in the melodic metal vein, and boasting former Gamma Ray bass player Uwe Wessel in its ranks, Gothic Fate was never able to secure a proper record deal when they were an active band from 1998 to 2005. Generally, there’s some quality small independent willing to plop down an album of this sorts; it’s almost a given since melodic/power metal is all the rage in Germany. But never mind the fact it took a decade for Illuminati to receive a proper release from emerging Polish independent Skol Records. It’s a dependable effort of song-oriented melodic metal worth a look.

A good chunk of the album hovers in and around mid-tempo, melody-first territory. The 80s lean of some of these tunes (see: “Bleed” and “No Deny”) is certainly passable, if not wholly enjoyable considering the hook-laden chorus choices from vocalist Stefan Harder. And while Harder may have the occasional flat note or odd cadence coupling, he’s right in the pocket, sort of an understated role player in a style that usually requires much more from its singer. But Harder’s range and accentuation makes due elsewhere, most notably on “Desperate Measures,” and “Angel of Sin.”

Skol Records, who like a lot of their contemporaries, have made a wise choice by pulling this one out of label-less purgatory. It’s a notable touchstone since it was one of Wessel’s final recordings, with the bass player having retired from active duty in 2006 to focus on other endeavors. And even though Gothic Fate were never able to fully infiltrate the vast, sometimes too-voluminous field of German melodic metal, they at least went out with an album that has aged well. A worthwhile reissue.