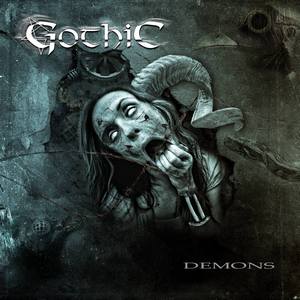 A Romanian band initially hitting the scene in the ‘90s with one album before falling off the map (Touch of Eternity), Gothic then made their return a few years ago with Expect the Worst. Now the uniquely styled band (though not exactly “gothic” per say) has their third full-length hitting the streets in the form of Demons.

With this release being this scribe’s first exposure to the act, it was pleasantly challenging to try to dissect the scope of Gothic’s sound. It’s an interesting combination of hard rock, death ‘n roll, doom, and more. You can hear some later day Sentenced, some Entombed, and even some Gorefest vibes through the album (and that’s just listening on the surface level), and the band changes things up regularly to keep you on your toes. One constant is that of some catchy melodies (see “From Within”) that range from melodeath riffing to acoustic moments to more rocking hooks. Despite the range of influences and sounds, Demons remains cohesive largely due to these melodies. They keep it punchy, straight-forward, and consistently moving ahead. The growls are impressive – keeping a more brutal approach while being completely understandable and the occasionally used clean vocals give a nice sense of balance, nor are they the commercially driven type.

The term “solid” comes to mind repeatedly when hearing Demons. There’s a sound that you can hear different vibes from without going too far into ‘worship’ territory and never really focuses on trying to capture one feeling. The melodies work and allow Gothic to tie their diversity into one flowing movement. An enjoyable album to check out from beginning to end, even if it feels like their shining moment is just a little further down the road.