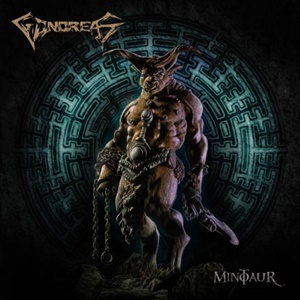 A Swiss act together for two decades, Gonoreas are a fresh band for this writer – probably due to the mostly German label affiliations over the past three records. They’ve been able to gain the services of notable singer Tim Aymar as a special guest on 2015’s Destructive Ways – as well as secure production expertise through Panzer guitarist V.O. Pulver. Minotaur is the quartet’s sixth full-length, showcasing a sturdy brand of power metal that traverses American and European lines.

Damir Eskic as the sole guitarist develops layers of rhythms and harmonic accents that enhance and elevate many transitions instrumentally – check out his effective use of doom-laden notes after delivering a Metallica meets Maiden-esque passage for “Eris” or use of whammy bar and melodic emphasis during the lead break for “Fragments”. These musicians aren’t afraid to put in everything from crunchy riffs with modern touches or turn on a dime and develop an acoustic-oriented treatment such as the ballad “Behind the Wall” – proving the expertise Gonoreas has for that dynamic punch necessary to keep listener interest track to track. If looking at the style across the ten songs, you can tell the band take melodic hard rock and NWOBHM templates, add in this European power metal thickness, and spit out anthems of the mid-tempo to slightly faster variety.

Vocalist Leandro Pacheco has that Dickinson-esque charm, but then rears back for some Halford-ish high cackle screams in the title track to show us that there’s a multi-dimensional personality shining for the metalheads to cherish. Cultural/folk-like electric movements open the longest track “The Lead Masks of Vintern Hill”, the main riff and supplementary rhythm section support firing up the battalion, while the shape shifting, left field speed changes keep listeners alert for the next sweeping hook. Truth be told, Minotaur gathers the metal troops and stirs the embers of Metalium while entertaining gallops that travel across a lighter Iced Earth galaxy – an intriguing mixture that works quite well.