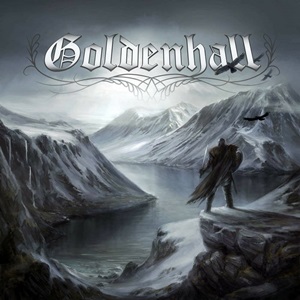 Forming out of the remnants of other local New England bands, Goldenhall from Rhode Island arose in the fall of 2014, honing in on symphonic power metal sound with prominent melodic death influences for their debut, self-titled EP. Multiple layers attack from track to track, imploring the listener to successive, deeper listens for an ultimately long-lasting appeal – epic for certain, grandiose not only in terms of the musical construction but also the lower to mid-range operatic/melodic vocals. Spending the past year fine tuning all aspects of this recording will pay dividends for all listeners, as the band comes from more of a European precision and feel lineage when the build ups and transitions come natural for the needs of a particular arrangement – individual accomplishments forsaken for Goldenhall’s final outcome.

Twin guitar rhythms and hook nuances can often develop in simple, echoing refrains from the verses to the chorus – almost folk-like a la Ensiferum meets early Orden Ogan for “Ship in the Fog”, as Ryan Spahr and Greg Rosche take a key riff and then build emotional momentum to embed those epic mid-tempo power chords deep into the psyche. Drummer Matt Young can transform a tempo from natural straightforward metal to blasting death in the blink of an eye, check out his speed snare/kick skills during opener “The Men of Dunharrow” and you’ll be converted quickly to his stellar abilities. Symphonic keyboard splashes add cinematic/theatrical embellishment, while the star of the show for Goldenhall will be the vocal prominence of Jason Shealy. A classically-trained baritone delivery gives off more of a dramatic, Falconer-ish feel in that department, so much different than a lot of the soprano or falsettos you may be used to from this particular genre – allowing his stories to paint vast pictures for the mind. The slower “Deep Sea” as well as the Tolkien-oriented closer “King Under the Mountain” are riveting and shimmering at the same time, the latter again gaining strength from its melodic death speed ramp ups.

Brilliant cover art from renowned artist Par Olofsson (Exodus, Solution .45) plus proper production values- this type of product this early in the band’s career is atypical for not only a New England band – but any particular band in the symphonic power metal genre. Goldenhall put their best musical foot forward on this four song, 24-minute plus release – if they can deliver as well on a live front these gentlemen could be in for a long, bright career in the business.