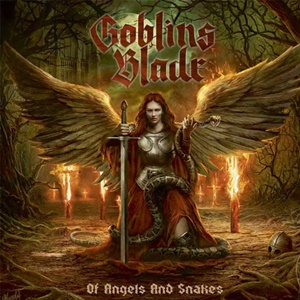 Containing members associated with Sacred Steel, Mystic Prophecy, Chinchilla and Destillery among others, Goblins Blade started from the reigniting passion for power metal courtesy of guitarist Jörg M. Knittel. After leaving Sacred Steel in 2006, he delved more into doom and death waters through Dawn of Winter and My Darkest Hate respectively – before the debut EP Awakening brought Goblins Blade attention in 2019, critical acclaim in prominent German metal magazines and eventually interest from Massacre Records to sign the band for this debut full-length Of Angels and Snakes. And for those who love a classic 80’s framework of old school power riffs, upper register vocals, and triumphant tempos – these nine songs cherish good and evil plus a mix of US and UK influences.

The foundation of steady Claudio Sisto double bass execution and Jörg’s knack for the proper power riff that aligns to a warrior-like motive immediately makes tracks like “Final Fall” and the Omen-esque “The Bell Is Broken” pounding efforts that old school headbangers crave in this day and age. The sole ‘epic’ of the record “When the Night Follows the Day” contains the proper mid-tempo atmosphere and majestic musical framework, allowing vocalist Florian Reimann to glide up and down his sinister register – rising to mountain top glory as well as being one with the crowd during many of the verses. These gentlemen are content to keep the tone and sonic values very primitive as well – preferring to keep as organic and natural of a sound as possible, the gang harmonies for the chorus of opener “Snakes From Above” decidedly Teutonic in their Grave Digger-like execution. You can imagine audience chants in unison to certain power chord combinations throughout (“Fall into Darkness” a specific standout in that regard) – the band savoring older Judas Priest, Savage Grace, and Metal Church records for their tools of inspiration.

Already familiar with Florian’s work during the late 90’s/early 2000’s for Destillery where he often drew comparisons to Bruce Dickinson, there’s a bit more of a warble to some of his melodies that could be a bit of a sink or swim proposition for listeners to handle. To these ears, his approach helps Goblins Blade gain street credibility, metal to the bone – allowing Of Angels and Snakes to be one of the German metal standouts for 2020.