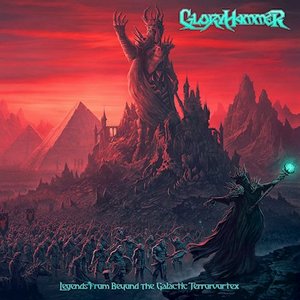 Four years removed from their sophomore effort, Space 1992: Rise of the Chaos Wizards, the over-the-top power metal act of Gloryhammer finally returns with a new album. Given Christopher Bowes’ penchant for silliness and bravado in his material (Alestorm, Christopher Bowes and His Plate of Beans), it’s no surprise to fans that Legends from Beyond the Galactic Terrorvortex maintains the same levels of ‘not taking itself seriously,’ though the thoughtful musical compositions still shine brightly beneath.

Continuing the fantasy concepts of the first two albums before them, Legends promises more Angus McFife XIII in a tale of the most gigantic battle of all time. Strange as it may be at first, it’s this sort of tongue and cheek nature that allows Gloryhammer to work. The bombastic Rhapsody-esque power metal sound combined with lyrics that are purposely a bit hokey just cranks everything up to 11. But even if you aren’t down with some of the fantastical lyrical antics, you’ll still have a hard time removing some of these tracks from your head. “Masters of the Galaxy” is so triumphant and full of charisma that you’ll simply want to sing right along with it. “Legendary Enchanted Jetpack” strikes the same chord later in the album, with a galloping tempo and soaring vocals sure to inspire even those dead set against it. It’s clear that a ton of passion has been soaked into the project, from delivering potent hooks, punchy riffs, and glorious vocals into each and every track – something that is aimed directly at the listener for maximum enjoyment.

Gloryhammer’s third album is every bit as bombastic and charismatic as one could hope for. While some may not appreciate the completely over-the-top feeling the album provides, those willing to give it a listen will find an experience that is completely soaked in fantasy fun. 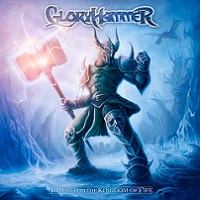 Gloryhammer – Tales from the Kingdom of Fife (Napalm Records)