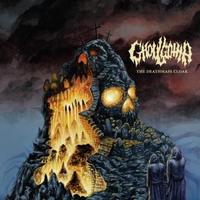 Just as there are many who swear by the overall quality of a label like Profound Lore, another label that has been earning that same sterling reputation is that of Dark Descent Records. Enter one of their latest signings, Ghoulgotha, to keep that consistent reputation going. If hearing the name “Ghoulgotha” makes you think of some heavy doom, then you’d be correct.

The Deathmass Cloak is the first full-length from California’s Ghoulgotha, which comes off as doom death with a few interesting twists. The band deftly switches between slow, plodding doomy riffs and speedier ‘90s-inspired death metal but that seems more like a requirement in this day and age rather than something worth praising, although “Neck for the Nameless Noose” really nails this. What Ghoulgotha do right is weave in plenty of dark melodies that give them a sound of their own. One might be of-put by some of them, due to the odd and initially strange/creepy sound they give off (see the opening of “Arteries Unblest”) but these aren’t your standard issue happy melodies and keep Ghoulgotha as a purely deathly experience (as opposed to giving it a NWOBHM/Gothenburg treatment). It’s a welcome change of pace from many deathly bands who feel they need something overtly catchy to keep their listeners attention. The other aspect of The Deathmass Cloak worth noting is the crushing weight the doomy sections are given. When Ghoulgotha slows to a crawl, expect to be thoroughly bludgeoned by the guitar department. Being that some of the best melodies previously described also occur in these segments, it’s never a predicable course from A to B.

So if you prefer you death metal with a doomy edge, chances are The Deathmass Cloak will give you plenty of entertainment. It’s nice to hear a band that has already separated themselves from the pack, particularly with only one full-length in the books. Plus, note the killer artwork! 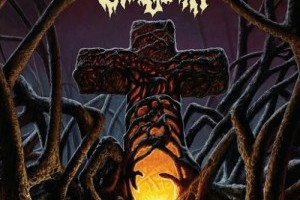