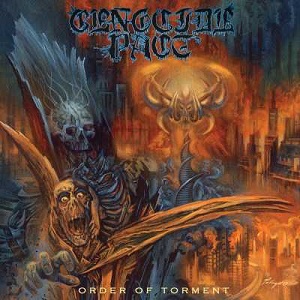 Relapse used to have the market cornered when it came to bands like D.C.’s Genocide Pact, a savagely heavy death/doom band. The label has done an excellent job of diversifying its roster the last decade-plus, so signing Genocide Pact (who released their 2015 Forged Through Domination debut through A389 Recordings) represents a bit of a throwback. After all, Genocide Pact appears to take cues from one of Relapse’s most enduring bands, Incantation. On their sophomore Order of Torment, GP upholds all that is right and (unholy) with death/doom.

Just a three-piece — Tim (guitar/vocals), Nolan (bass) and Connor (drums) — Genocide Pact could wiggle themselves into the current front of newer extreme bands making waves ala Code Orange and Power Trip, only for their retrofitted sound benefitting from a modern production. Indeed, the sounds that bound across Order of Torment don’t have the scuzz and grime of old-school revivalists; rather, it’s a pretty crisp-sounding recording, especially when the band start burning the road with their doom breakdowns, as heard on “Decimation Grid,” an ode to Incantation if there ever was one.

There’s a never-ending serve-and-volley between glacial doom and spartan death metal, as Genocide Pact appears to be of two styles and one mind in Order of Torment’s running order. And there’s plenty of moments to latch onto, whether the opening thunder-toms of “Spawn of Suffering,” the U.K. groove of “Ascendancy Absolved” and the blasting of “Structural Dissolution.”