Gatecloser – From the Wasteland (Sliptrick Records) 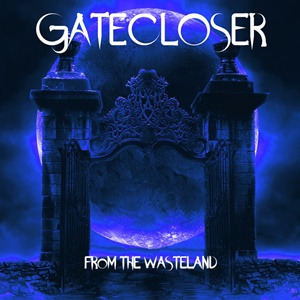 We need more bands that come at specific genres from alternate angles. Describing themselves as a conceptual, alternative metal band that contains aspects of thrash and power metal, Gatecloser possess plenty of melodic hooks and groove-oriented qualities through their debut full-length From the Wasteland. These Italians have shared the stage with Alestorm and Kiko Loureiro (Megadeth guitarist) over the past, and after a few spins the four-piece make good use of their abilities through these eleven tracks.

On the music front, guitarists Stefano Tarroni and Matteo Corbara fill up the aural landscape with a mix of power chords and alternate licks, pushing specific songs like “White Bones” and “Death Parade” to the forefront in terms of memorable passages and passionate interplay. It’s as if they’ve studied a bit of the outside the box versatility that has helped domestic act Extrema make a mark on the scene – often zigging when others go straightforward for speed, tempos, and transitions. The alternate sound comes up occasionally in the progressive manner that some main sections represent – along with the mid-range, emo/gothic style vocal delivery Stefano employs. Look into “Bury Him Alive” and the grungy meet traditional overtones for “Blackout” that prove Gatecloser come from more of a 90’s/2000’s sonic base and inject their thrash-like spots when need be. Keyboard use in spots creates dynamic and haunting segmentation, with the shorter instrumental spots “From the Wasteland…” and intro moments to “King of the New Dawn”, while the 1:28 closer “…They Will March On” wraps up the record quietly through a lower register, talk-driven vocal and acoustic guitar strumming. Hopefully the band will utilize bassist Nicola Gavini Fioretini a bit more on future releases as they do during the opening sequence of “The Crow” – as his fluid Steve Harris/Geddy Lee-style abilities deserve more space to separate Gatecloser from the pack.

From the Wasteland has semi-progressive and power/alternative aspects that put this thrash band into a melodic veneer but can’t really be classified as a prototypical act in a specific niche. If they can gain more seasoning and strength on the vocal side of things, Gatecloser could open some minds in the metal realm.