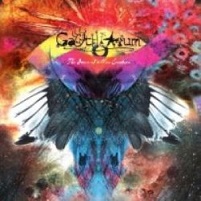 Remember when Austin Powers was frozen for three decades, and upon being de-thawed, proceeded to “relieve” himself for what seemed like 15 minutes? That could be the parallel to Garth Arum’s terribly overblown Dawn of a New Creation album. Instead of being tucked away for 15 minutes (not in that sense. Gross!), the album has supposedly been in the works for 15 years, which means Arum main dude Nightmarer has sat on this thing while all sorts of exciting things have happened. He’s even worse than Wintersun’s Jari Maanepaa.

Depicted as some sort of avant-garde haven that draws in Arcturus, Ved Buenes Ende, and Winds, Garth Arum simply have too many ideas floating about to making anything concrete out of the 11 songs on display. DR thought it was possible to make it through this album twice in one evening, and while the promising “A New Creation” (like the Devin nods) and ethereal “Shadows of the Past” have weight and atmosphere, the album gradually descends into a land where apparently, no idea is discarded, making it a two-night chore. Mr. Nightmarer would be advised to trim down some tunes, focus on a central idea or two (but not three!) and allow his dynamic reach to not be so alligator-armed.

Understandably, the need to showcase one’s musical versatility and array of musical ideas is the grounding for Dawn of a New Creation. However, Nightmarer should take some cues from the real masters of avant-garde (Celtic Frost, the aforementioned Arcturus), and learn that sometimes, less is more, even when you feel otherwise and have waited an eternity to get one’s musical ideas on the table.