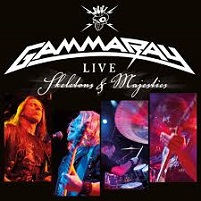 After spending the better part of 2012 promoting Unisonic with Michael Kiske, Kai Hansen has promised to turn his attention back to Gamma Ray for 2013. Before that can happen, the band is getting another live album out of its system, this time by way of the double disc Skeletons and Majesties Live. Recorded at a 2011 Swiss concert, Skeletons and Majesties catches Kai and the boys at their playful, exuberant best, even roping in Kiske for a couple of tracks. Always nice to see some type of Helloween connection…

Speaking of Helloween (which we’ll be doing a lot of in about a month), live albums such as this tend to make Blistering ponder the fact that Hansen vacated the vocalist position he initially held in the ‘Weenies. Legend has it that Hansen felt he was holding the band back with his vocals, even though his work on old stalwarts “Ride the Sky,” “Reptile,” and “Judas” suggested otherwise. This might also have something to do with the relatively complex nature of the band’s compositions back then, which in comparison to Gamma Ray, are more advanced. When Hansen gave up the vocalist spot to Kiske, the control in the band gradually shifted over to Michael Weikath and to a lesser degree, Kiske. Therefore, one has to wonder how things would have turned out if Hansen remained Helloween’s singer…there probably would be no Gamma Ray, and Kiske more than likely would have chased in a career in his chosen style of music, light rock.

Hypotheticals aside, the live set hauls out some of Gamma Ray’s lesser-known numbers, including the bouncy “Men, Martians and Machines,” the gallant “Wings of Destiny,” and steadfast “Hold Your Ground.” Kiske pops up on three numbers – “Time to Break Free,” “A While in Dreamland,” and naturally, “Future World,” which also appeared as an extra song on Unisonic’s self-titled debut. They sure are getting a lot of mileage out of that song, aren’t they?

A typical transition release, Skeletons and Majesties Live falls far from “must-have” territory. It’s just another excuse for Hansen and friends to extol the virtues of their fun, zippy power metal, along with setting the stage for their forthcoming studio album, which should be an improvement upon 2010’s rather tepid To the Metal.