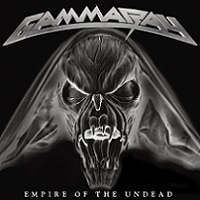 Mr. Kai Hansen, aka “The Godfather of Power Metal” has never been one to hide his affinity for metal (see: “Metal Invaders,” “Heavy Metal is the Law,” “To the Metal,” et al). It’s what has kept him in the game for so long, surviving during the treacherous 90s, and emerging through the 00s as a sage, father figure, with a near-spotless reputation. Therefore, it’s with little surprise that the band’s new (and first in four years) Empire of the Undead is so unabashed in its meaty, Teutonic, take-it-or-leave-it-because-we’re-not-changing approach. The end result is the band’s best work since 2001’s No World Order.

A switch on the drum throne (Michael Ehre replaces long-time sticksman Daniel Zimmerman) is really the only differentiator between Empire and the band’s work from 1997 on up. Swished around high-rail, double-bass stormers like “Hellbent” (which serves as the album’s prerequisite metal call-to-arms) and the title track are poppy, ear-friendly cuts such as “Master of Confusion,” which follows a similar melodic thread to “I Want Out.” Lest we not do a double-take on the lyrics for “Born to Fly,” which are about an eagle soaring through the sky…touching rainbows. Ever hear such a theme before?

Still, the ideas Hansen and team haul out across the album’s ten cuts certainly are of the familiar variety, yet the hard-wired “Pale Rider,” anthemic “Time for Deliverance” and momentous “I Will Return” are exacting, rousing cuts, right up the power metal gut with no pretense or extra trimmings. It’s a cool thing to see…the ‘Weenies are at their heaviest right now, while Gamma Ray figure to match them wit-for-wit. Too bad the two are friends now. A competition like this would be prime viewing.