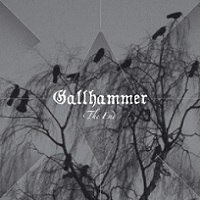 We’ll take “feel” over go-for-broke technicality any day of the week, but somewhere you gotta draw the line, and that line is with Gallhammer’s third album, The End. Reduced to a duo after the departure of guitarist Mikka Penetrator, the Japanese all-female crust/doom mongers sound about as competent as a garage band. This is beyond sloppy and unrehearsed drivel, and it’s a minor miracle the well-respected Peaceville Records decided to release this at all.

According to the credits, there are no guitars on this thing, just the distorted bass of vocalist Vivian Slaughter. Obviously, there’s no way this was going to sound any good (only if Cliff Burton was playing) and the songs

clearly suffer because of it. The clumsy “Aberration” (complete with hyper Japanese female vocals) and “Sober” are as listless as they come. The band’s attempts at being extreme are quite futile on “Rubbish CG02” and “Entropy G35,” so much so that one has to wonder if these songs were even rehearsed at all.

Some may find a degree of charm within The End’s dumber-than-thou tracklisting, yet this is one of those albums that even the most ardent pusher of necro and all-around grim metal will have a hard time getting behind. What a mess.