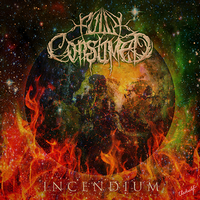 Many times in life, you don’t get a re-do. But it’s not always the case – just ask Akron’s Fully Consumed. Last year, they released an ‘unpolished’ version of Incendium but the band was not happy with it. So now you are looking at a re-issued of Incendium that has been upped to the band’s standard. So does that make this re-teched death metal?

Terrible joke aside, Fully Consumed play death metal that panders to both fans of technicality and groove. Crafting “songs” instead of showboating, Incendium seems to grasp the notion that sitting around and playing the most uber-technical stuff can get pretty monotonous and there’s a bit of groove that is injected that keeps the balance of complex riff patterns from becoming passé. “Prophet Margin” is notable for some a nice break of mid-tempo chugging (and no, we aren’t taking deathcore here) that breaks up some of the faster paced chaos that surrounds it. Other songs also follow suit here, with cuts like “Genetic Predisposition to Warfare” and “Engaging Ghosts” also standout in this regard. In terms of the production, not being aware of the original, it’s safe to say that the remaster has some solid sound. As clear as it needs to be for death metal (without being glossy) and everything has plenty of space, even the bass!

While nothing really moves out of the death metal comfort zone, Fully Consumed have provided a rock-solid debut to build upon. Fans of well-rounded death metal take heed, Incendium will have no problems giving you the auditory punishment you are looking for while keeping your brain active and awake.