From the Depth – Moments (Rockshots Records) 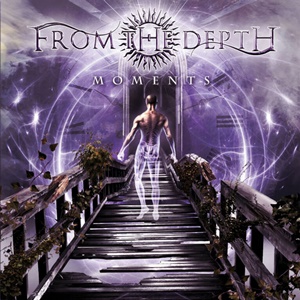 Back story always has context – perseverance can prevail and showcase grit and character for many musicians. In the case of Italian power metal act From the Depth, their start as a cover band in 2008 evolved into an original demo in 2010, a full-length with Back to Life the following year, and then their last EP Perseverance in 2014. Soon thereafter harder times and lineup shifts occurred, gaining new guitarists and re-recruiting drummer Cristiano Battini into the fold. Preparing us for album two in Moments – gaining a sense of confidence in the quintet’s mixture of melodic power metal that takes on aspects of their own European heritage and a bit of flair for the US dramatic/finesse angles.

Eschewing any bombastic intro, “Immortal” gets the record off to a catchy start, the keyboard/guitar movements featuring neoclassical aspects amidst the standard uplifting power riffs and melodic, multi-octave vocals with supplementary choir background enhancement. The guitar presence is thick and heavy, songs like “Spread Your Fire” and “Missed” along the lines of Firewind and classic Rainbow – many of the lead breaks quite captivating to bring about the axe hero attitude in us all when taking in this style. As a singer Raffaele Albanese has that higher falsetto charm with the occasional Italian accented phrasing come to the forefront – when you take in the Kamelot-esque “Ten Years” for instance, it’s as if you are transported to Timo Kotipelto/Stratovarius’ world, leading the charge through a song that includes some tranquil instrumental sections that come off as new age. When you need that power/speed burst with progressive twists, “Forget and Survive” delivers, featuring killer double kick mechanics and the ideal Teutonic chorus that Gamma Ray/Helloween fanatics savor – while the almost eight-minute epic “Just Ice” throws everything from a melodic death guitar type part into a calmer, bass-driven Maiden-esque passage into the power mix.

Recording with Simone Mularoni at Domination Studio and gaining some choir support from Labyrinth’s Roberto Tirani, it’s evident that From the Depth have a solid foothold and proper understanding of the genre at hand to achieve momentum. Now it’s a question of promotion as well as hopefully live appeal when that can finally come back to fruition – but rumors abound a third full-length will be out quicker than expected, so let’s watch to see how things progress.