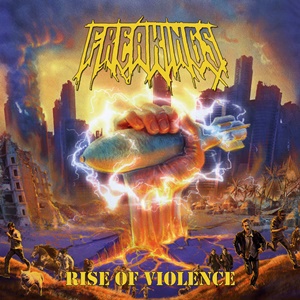 Rarely do journalists get a chance to take in a band’s main catalog as they prepare to review the latest album for an artist – but that’s just what happened for this scribe when it comes to Swiss thrash band FreaKings. A three-piece that have released three previous albums, Rise of Violence is their latest and fourth full-length, and what an explosive, relentless set of material comes bursting through your speakers on this go around. It’s as if someone sent unlimited energy drinks injected in the bloodstream to these musicians and propelled the riffing, tempos, and vocals into speedier landscapes you normally hear from thrash acts maybe once or twice on a record – not for ten tracks and forty minutes.

The main crux of FreaKings style relies on jackhammer chord combinations against a rhythm section that pounds your heart out, transitions occasionally at a relatively normal pacing, and then vocals in the main that are equally crazy and maniacal while the gang shouts invite unison audience engagement. Do not expect precise on point soloing – guitarist / vocalist Jonathan Brutschin subscribes to more of a Slayer-esque frenzy against minor melodic cues when you take in his work for “Brainwash” and the title cut. The stop/start mechanics through his riffs and the insane speedy fills and normal snare/kick action from Simon Straumann elevates bodies to infinite hair windmill, headbanging shuffling – making “Enemy Attack” and “Psychedelic Warfare” satisfying time and again. They do love the Bay Area thrash movement a bit – but it’s the aggressive sides of Exodus, Dark Angel, and the like instead of going for the obvious ‘commercial’ aspects – Jonathan as a vocalist probably projecting a clearer Tom Araya through his crazed, rapid fire delivery, injecting his personality with some sinister, varied screams during “Time to Thrash”.

If there is a criticism to be leveled, it could be that many will be able to predict the similarity in some tracks as far as attack and tempo/transitional maneuvers – it could be something that FreaKings digs a little deeper into for the next set of songs. Even when they throw a slower 15 second start for closer “King Reigns”, the band quickly hit warp speed again and the blitzkrieg doesn’t stop. Rise of Violence is not for the faint of heart – it’s thrash made for adrenaline junkies and those who appreciate the intense nature of this style.