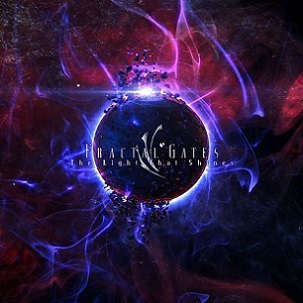 A hot commodity within the melodic death metal community, France’s Fractal Gates was last heard from via 2013’s sterling Beyond the Self, a space-faring, astral shower of lively melodies and blunt, simplistic riffing. Even though melodic death metal remains a pretty straightforward definition, Fractal Gates somewhat buck many of those conventions, notably in the riff and atmosphere department. Where their peers feel like they’re coming from the barns of Gothenburg, Fractal Gates feel like they’re coming at you…from another planet. On their third full-length and first proper label release (by way of Rain Without End), The Light That Shines, the Frenchmen continue to carve their own indelible path.

While harsh vocalist en force Sebastien Pierre continues his larynx assault, the underbelly of Fractal Gates comprises basic power chord riffs. On the surface, it’s a threadbare component that most bands couldn’t work with. Instead, Fractal Gates gets plenty of mileage out of this template, emerging as the driving force on “Chasing the Line,” an early album highlight, as well as “Infinity.” On top, though, resides a steady stream of melodies; some melancholic, others, darting through with precision, like on “Dreams Apart,” which emerges as the album’s most memorable cut.

Seemingly aware of their limitations or understanding that tight, compact songs usually land the best, Fractal Gates pop out 13 jarring, immediate numbers, three of which are instrumentals designed to break up the flow. Aside from that, Fractal Gates haven’t accumulated a strong underground following by accident — after all, this is melodic death metal for the otherworldly.