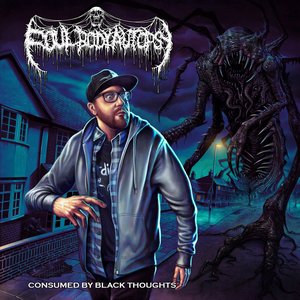 Created in 2010 and named after the Necrophagist song, “Foul Body Autopsy,” Reynolds previously released a slew of EPs, singles and two full-lengths, with the last one being 2018’s This Machine Kills Zombies. On Consumed By Black Thoughts, Reynolds serves up some memorable melodeath with melodious hooks, thrashy riffs and strong storytelling during its perfect 22-minute runtime.

Coinciding the album release date with World Mental Health Day is no coincidence. This new collection of songs were written from Reynolds’ own perspective of living with a mental illness. “Vicious Cycles (Feeding Off Themselves)” sets the tone for the overall album theme with spoken word samples describing certain depressions while Reynolds lays down some emotive, hooky melodic guitar melodies and thrashy/melodeath riffs. The track’s mid-paced gallop contains a nice flowing, fluid rhythm with a killer, catchy chorus. Vocally, Reynolds delivers classic, throaty guttural death metal cadences, while also delving into a harsh, mid-range voice throughout the album. Although they’re not the strongest of voices, they work well in the context of this musical style.

Each of the five tracks begin with a spoken word passage, setting up the storyline about a particular depression. Tracks “Like A Phantom Of The Heart” and “Trapped In The Shadow Of Fear” rely on piercing keyboard melodies to enhance the mood, while “Vicious Cycles (Feeding Off Themselves)” and “My Liberation In Death” contain classic thrashy/melodeath riffs. From album opener “Vicious Cycles (Feeding Off Themselves)” to the classic melodeath traits of album closer “Trapped In The Shadow Of Fear,” Consumed By Black Thoughts contain many memorable moments.