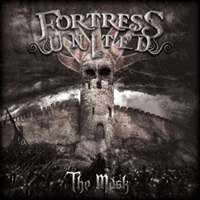 Manteca, California in the Central Valley is home to Fortress United – playing together since 2014 and a very entertaining quintet who on their debut 5 song EP The Mask unleash a wide array of melodic, thrash, and semi-modern/extreme aspects to keep listener interest on high alert. The hardest part in developing a following for younger bands relates to strength in songwriting diversity – it’s okay to develop key elements for consistency sake and then build organically off them to establish individual hooks through atmosphere, tempo variation, or even riff to instrumental transitions. Fortunately here quality trumps over their relatively short existence as a band, making this material adhesive and addictive.

There’s a smoothness right out of the gate in terms of the rhythm guitar parts from Stephanie Liedtke (since moving to bass following the recording), opening up a lot of rhythm section nuances during instrumental spots – evident right out of the gate on the shapeshifting title cut. Vocalist Alie Grabowski comfortably switches between a raspy growl/scream voice and this semi-gothic, melodic singing style that gives Fortress United a hypnotic swagger of sorts, as one can easily hear certain tracks comfortably appealing to a more rock radio audience (think self-titled Metallica) as they could to followers of Christian Mistress or Kobra and the Lotus. The exotic, semi-tribal chord progressions and tribal aspects to “Mosh” open up a sultry chorus, while “I Know” takes on more of a classic metal template, the drum tempo and power chords in a swing/shuffle state while lead guitarist Nick Henry unfurls this magnificent instrumental break from 2:32-3:06 that would make Michael Schenker and Gary Moore followers worship. Tasteful enhancement to the dramatic emotional intensity of the song while not overshadowing or shredding for shred’s sake – one of the many reasons why this has received incessant playbacks.

Choosing to keep the lyrical content more personally based than tackle big social/political commentary also should aid Fortress United in gaining a common bond to their audience. Never afraid to go from a steady groove point to a more doom-oriented transition (closer “Rise” living up both principles), The Mask will open a lot of doors for the band, as their comfort in a multitude of metal sub-genres could pay dividends in impressing fence-sitters. Who says there aren’t US metal bands to dig into?