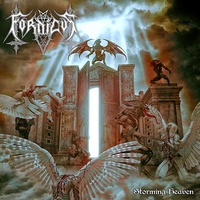 Norway, Sweden, Greece, Kentucky. In a discussion on black metal, the latter location should seem extremely out of place, which is all the more ironic that it’s the base of operations for Fornicus, who have crafted a debut album that should instantly make them a standout contributor in the BM community. With the right mixture of old- and new-school aesthetics, production that expertly straddles the lo-fi/crisp demarcation line, and judicious flourishes of non-BM styles like death metal and thrash, Storming Heaven is a technically flawless debut that should put the entire extreme metal universe on notice.

Fornicus have stated that they “meticulously crafted” the songs constituting their debut album, and it shows. The complexity and ever-shifting dynamics of each track belie the band’s neophyte status, taking listeners on a compelling and unpredictable journey through each piece. The Watain-style black metal of “We Are Sin,” for example, gives way to the equally blackened “Pallium Mali,” which seamlessly transmutes into a dissonant death metal groove akin to Morbid Angel’s early work. Likewise, these more-straightforward offerings are juxtaposed with sprawling atmospheric tracks like “Into Obscurity” and “The Beckoning,” both finding their forebears in the likes of Bathory and Immortal. Couple the exceptionally written songs with the sage choices of track arrangement, and each track-length journey becomes but one side quest on a sonic odyssey through the sinister landscape Fornicus has created. Even the placement of the band’s devastating cover of Sepultura’s “Antichrist,” located at dead center rather than the more traditional choice of the end, is indisputably more effective than any other position would have allowed.

Fornicus have forged their debut record with a quality that takes most bands four or five attempts to accomplish. With no weaknesses to speak of, instead only a smattering of driving, malevolent, and irresistibly engaging cuts of blackened metal, Storming Heaven is a must-listen for extreme metal connoisseurs. Fornicus have all the natural ability to become a major force in the metal underground, and this first statement sets the tone for a storied tenure to come.