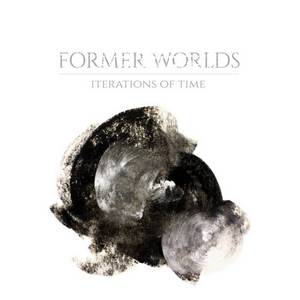 After teasing the metal community with a promising EP called Photos of Eve IX-XVI back in 2017, Former Worlds have now graced us with their debut full-length Iterations of Time. The band certainly took their time with their craft, and it shows. Four extra meaty tracks that will do well in your doom metal menu, guaranteed.

“Spectre” roars out the rusty gates in full form, the sinewy bass providing the meat and bones for this gorgeous opener. Indeed, the record features such speaker-rattling low-end frequencies that you constantly have to check yourself for bruises. Eerie synths permeate the song, anchored by Erin Severson’s anguished wails. There’s a vaguely static noisy layer permeating the songs, further supplicating the dread that envelopes the album. You have to do some digging to reach the synths buried under the mix, reeking of miasma and funeral stench.

“Variations on a Cave” starts out in a more upbeat manner, not unlike a troll casually hunting for any unwitting traveler passing by it’s territory. The call-and-response vocals are well-placed, what with Christian Moser’s sinister bark providing an excellent counterpoint to Erin’s siren-like clean singing. Some metallic, almost-glacial solo creeps in as the track progresses, making sure that the listener is reeled in as the darkness unfolds.

“Palimpsest”, a word that means “something reused or altered but still bearing visible traces of its earlier form”, is an apt title; as the track echoes the caveman drones of behemoths Sunn O))), or more appropriately, Primitive Man. Erin never lets up the intensity of her vocals, and she definitely holds her own with the best of doom’s infernal bellowers like Jesse Schreibman of Bell Witch or Ethan Lee McCarthy of the aforementioned Primitive Man (and Vermin Womb). Halfway through the track, faint plinking of keys make themselves known, as if to signify some lurking danger that hides itself in the shadows. It concludes in a maelstrom of noise, fuzz, and a dirge-like march to oblivion.

“Widows Moon” wraps up the record in a way that echoes the Melvins and Lustmord collaborative effort Pigs of the Roman Empire. Former Worlds saved the best (and longest) track to round up this sonic assault in a memorable fashion. This song absolutely lays everything to waste, only to take a breather around the six-minute mark as it strips down to Erin’s cleans, tenuous guitars, Mamiffer-esque piano, and tepid drumming. It suddenly lurches back into cataclysmic noise and harsh vocals from hell as it slowly and steadily drags your decaying corpse to malebolgia.