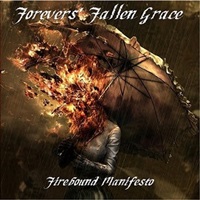 Rare indeed is the band that has been in existence now for 15 years that consistently churns out their own self-financed, independent product regardless of what the record labels care about these days. Massachusetts act Forevers’ Fallen Grace are on their fourth full length album here with Firebound Manifesto, featuring 8 original tracks of epic, culturally moving metal as well as a closing cover of the Mercyful Fate classic “Come to the Sabbath”.

What is there not to like if you are a fan of emotional, melancholic vocals from Michael Ferro, stirring guitar harmonies at a doom or mid-tempo pace from Ken McKee and Nelson Moore, and a rhythm section that is equally important in a progressive sense through bassist Kyle Hannon and drummer Jim Norris? Very European in their outlook, attention to dynamic textures, and possibly their longer arrangements put songs like “Dominion”, the Blind Guardian meets Twilight of the Gods–like “The Dying Light” and massively electric folk meets doom opener “A Slow Epic” in a rare class, exuding confidence in a genre they love and cherish.

“From the Shadows…to the Dark” features a guest female vocal spot from Kristine Kisselbach, the reflective guitar and keyboards building from a quiet start up the doom/heavy metal march climb a la Sentenced or “Rime of the Ancient Mariner”-ish Iron Maiden, Michael using more of his chilling lower range during the verses to dramatic effect. And you have to love early Mercyful Fate if you are any ardent classic metal fan, and FFG do an admirable job of bringing the audience up to speed with King’s screams/shrieks and the steady dark riff parade.

Considering they are on the final touches of album number five (which should hit the streets in late 2014), you would be wise to pick up Firebound Manifesto if you enjoy epic, power/doom metal that embraces all things melodic from folk/Celtic harmonies and melodies to classic and progressive textures. One of many reasons why Forevers’ Fallen Grace still stride strong – respect for the genre at hand. 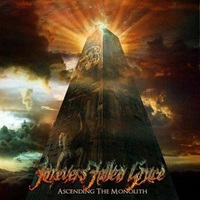