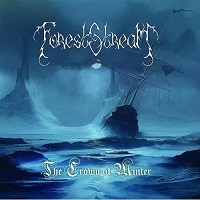 Good enough to open for Katatonia during the Swedes 2007 run in Russia, Forest Stream could be the most visible Russian metal band since Mental Home, who came as fast as they went. While it’s unlikely the same fate will befall this long-running sextet (they’ve been active since 1995), they’ll need to conjure up a little more muster than what is shown on The Crown of Winter to catch the impatient ears of the international underground.

On paper, the band’s mix of symphonic and classic Goth is an appetizing one. Opener “The Crown of Winter” is a tell-tale sign of what the band is capable of, as it’s clearly the best number of this very much bloated 8-song offering. The melodies presented are of the sinewy variety, recalling mid-90’s Katatonia and early Paradise Lost, yet the keyboards play too heavy of a role, dominating “The Seventh Symphony of Satan” and “Autumn Dancers.”

With the exception of the very-Emperor “Bless You To Die,” Forest Stream’s laid-back, almost Tiamat-like approach starts to grate and that’s only because when there is a batch of goods (see the mournful melodies of “Mired”), the band decides to lay off the gas and drifts into more atmospheric nothingness. Sorta frustrating. And the volleying growled/clean vocals of Sonm the Darkest are an acquired taste, especially when the clean side takes prominence (see “The Beautiful Nature”).

The Crown of Winter, for all its awkward balance, would be a world-beater if not for the extraneous elements that bog it down to no end. We’ll stick with the album’s first three songs

and ditch the rest.