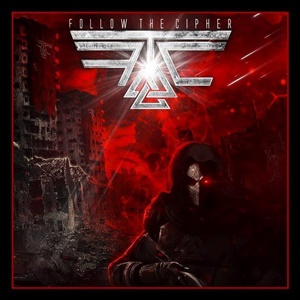 Developing as a solo project from guitarist Ken Kängström into a full band, Swedish group Follow the Cipher has ties to another blockbuster act from their hometown of Falun you may be familiar with called Sabaton. So it’s not surprising that getting their foot in the door may have been easier than other newcomers – but when you sign to Nuclear Blast out of the gate for your debut, self-titled full-length, the pressure is on to deliver the goods. After many passes it’s clear to understand that the quintet aims to broaden the modern metal landscape as they dip their toes in a variety of familiar power, melodic death, and electronic/cyber aspects to create a sound that can be very addictive immediately.

Employing multiple male/female vocalists with growling and clean capabilities adds to the versatility present – because the music foundation can switch on a dime to be more cinematic or symphonic while still driving for “My Soldier” or very poppy and pulsating as distant computer effects and swirling keyboards keep “The Rising” alluring for those who love Lacuna Coil and Amaranthe. Main singer Linda Toni Grahn has no trouble ascending to the highest notes possible, but also offers an enchanting lower/mid-range delivery during “Winterfell” that keeps things very raw and firmly from the metal position. The music compositions switch up from more Nightwish-oriented efforts like the ballad “Titan’s Call” to something more power-oriented with double kick action and stirring guitars for “Play with Fire” that could easily be a marriage of Sabaton and In Flames. Because most of the material sits in that radio-oriented time zone (only one of the eleven tracks pushing past five minutes), the focus remains on getting to the hook early, pounding it in, and hammering home the choruses that will be sung fervently when Follow the Cipher takes this material on the road. “Starlight” even contains a virtual who’s who of elite guest vocal support, with Nils Patrik Johansson, Johnny Lindkvist (Nocturnal Rites), Ronny Hemlin (Tad Morose), and Joakim of Sabaton trading off lines with the band.

Favorites change by the moment – currently this scribe favors the Battle Beast/Abba back and forth qualities to “I Revive” as well as the band’s cover of Sabaton’s “Carolus Rex” (an original co-write by Ken for the band). Sure to elicit controversy as the pop/keyboard aspects are as prominent as the metal, it’s hard to dispute the wide stew of influences combining into something many consumers can easily understand – which should help Follow the Cipher establish a presence quickly.